Big Read AMBASSADOR     PHIL KETTLE
On 10 APRIL 2011 the Children's Book Council of Australia - Victorian Branch, in association with The    City of Melbourne, the State Library of Victoria, Zart Art, And the Cities of Geelong and Ballarat had Victorian families all reading together for the BIG READ  !
Well done to all those who came along to the Big read. I hope you continue to enjoy reading. remember reading will open your mind and expand your knowledge. apart from that it is a whole lot of fun. imagine all of the places you can go by simply opening up a book !  There are over 50 million books in australian government libraries ... how many of them have you read so far ?  It was good to meet lots of reading families. 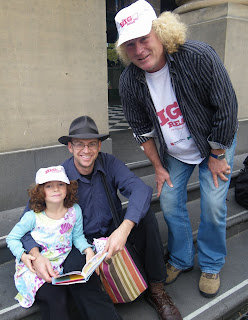 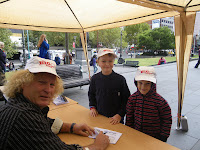 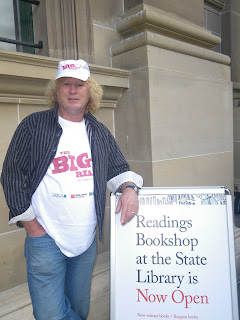 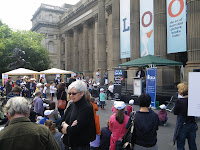 TOOCOOL and MARCY and their familes have packed up and are going fishing for the Victorian long weekend ... how smart are they ? VERY SMART !! awaiting the big fish stories or should I say big 'fishy' stories on their return
Posted by Phil Kettle at 7:25 PM 1 comments

ADVENTURE IN THE NATIONAL CAPITAL

The fact that it rained in Canberra over the last two days was irrelevant ... I was inside the War Memorial and the National Museum ... what a wonderful experience. So much to see and do ... and I have to fit it all into the last 50 years of my life ...
Posted by Phil Kettle at 11:28 PM 0 comments

While everyone knows that TOOCOOL rules, the reality is that people ask me, not him, the hard questions about boys and reading. That said, an analysis of TOOCOOL’s adventures will actually provide many of the answers that people seek when trying to unpack the range of issues associated with boys and reading.

The question I’m asked most often is "what can we do to get boys interested in reading?"

Some may consider it a straight forward question; my concern however, is that it makes an assumption that boys aren’t interested in reading.
Even when attempting to answer the question for the group of boys whose reading skills are particularly limited, I find that a range of stereotypes and all manner of conflicting generalisations get in the way.

At this point I need to stress that I don’t actually consider the term ‘reluctant’ to be appropriate. A boy may struggle to read at the level of his peers, however the word ‘reluctant’ infers that there is a choice. In my experience as a teacher and author children don’t choose not to read. The term reluctant also results in children being ‘labelled’ and having heard trusted adults describe them as reluctant, to my horror I have heard children using the term to describe themselves.

I am also keen to point out that it is really important to acknowledge that there are many boys with sound reading skills, who simply refuse to read what their parents and teachers want them to read. They will only read what interests them - surprise surprise ! Sadly, many of these boys are also labeled in a negative way.

My work with children has evidenced for me over and over again, that it’s the type of book that is presented to the boy that will most often dictate the boy’s response. When the response is rejection, be it by the boy with sound reading skills, or the boy who is struggling to read at the level of his peers - the negative stereotypes and labels emerge impeding the progress we all desire.

Mindful of this, I have always believed it essential to introduce boys to books that present an environment where it is possible for their imaginations to run wild. More specifically, an environment where they can project themselves into the book, and consider themselves the main character. Books that are written in the first person enable this - and this is one of the reasons why the TOOCOOL books have been so popular with children, despite their diverse range of reading skills.

It’s also my experience that boys love books that reflect an image that matches the image that they want to project to others, and in many cases the image they really do have of themselves. They seek to identify themselves in the book, living the adventure. Hence the book that then allows them via imagination to be what they would like to be, and to do what they would like to do, is the book that they’ll choose to read, or try to read; sometimes over and over again, which is just fine!

This explains in part the popularity of books with characters engaged in sport. These books attract many boys. That said if sport is not the key, then the application of the same thinking can be extended to wizards, super-heros, inventors, killers of aliens or creepy crawly things, the characters boys find hilarious, those who fight in mystical battles and even Tazan!

Boys love to have fun. If reading is what we require them to do, and we do, then the book in question needs to be just as much fun as whatever else it is that they do that makes them laugh and jump around in an imaginary adventure, or create mischievous mayhem. The TOOCOOL character attracts and lures boys because he has fun in an uncomplicated and positive way. Better still he is in control of how much fun he has, where he has it, with whom he has it, and because most often he creates his own plot for his adventure.

Boys are constantly told to behave, to be tidier, and to be quieter - none of which they want to do, and none of which amount to the sort of fun they want to have. So it’s literally TOOCOOL to the rescue - the characters in the books are not contained or limited by the restrictions placed on boys in real life. TOOCOOL is an average boy, from your everyday suburb, living a relatively normal life. But he, like most boys, uses his imagination to create his own world, where nothing much goes wrong and he is the focal point.

In writing ‘TOOCOOL’ my main aim was to create something that would entice boy readers - no matter what their reading ability. The fact that the characters and adventures have such an immediate and strong appeal for boys (and many girls who love the MARCY character) has resulted in the TOOCOOL books contributing greatly to the development of those with both sound and limited reading skills.

TOOCOOL has been the reason why so many boys have picked up a book by choice, and became excited about reading. In turn, the term ‘reluctant’ should only ever be used when it comes to describing how a child feels about putting a TOOCOOL book down!

Hey – welcome to my blog ! As I start blogging I’m also writing my 160th  book (note to self - I wish I had a chocolate-frog for every good word I’ve typed). Anyway, this new book is one of several to be released in 2011 in the Australian Geographic series – OUR AUSTRALIA. In 2010 we released eight OUR AUSTRALIA books. I hope you’ve had a chance to read the books and catch up with Taha as he travels to incredible places throughout Australia. So far Taha has been to Mildura, Broken Hill, Kangaroo Island, Hobart, Kununurra, Longreach, Alice Springs and Byron Bay.
Posted by Phil Kettle at 2:51 AM 1 comments